The tournament is held at Shandur Top, the highest polo field in the world at 3,700 meters (the pass itself is at 3,800 meters). The festival includes folk music and dancing, while a large camping village of polo enthusiasts, adventurers and supporters also adds to the atmosphere for the duration of the tournament.  During the early 20th century, the British colonial rulers of India were the patrons of the game. In 1935, the British Political Agent, Major A.H. Cobb commissioned a polo field at Shandur, which came to be known as “Mas Junali” in the local Khowar language; the “Moon Polo field”. Cobb then encouraged the people of Chitral and Gilgit, quite often at odds, to settle their differences through an annual polo fixture, now known as the Shandur Polo Festival. Mas Junali became a venue of conflict resolution between the people of Chitral and Gilgit; while the three-day Shandur Polo Festival has developed steadily in recent years into the massive celebration of mountain polo that it is today.

Chitral and Gilgit have always played the game of polo closest to its original form. Each team has six players. The match is divided into two halves of 25 minutes, with a 10-minute interval. Only 1 polo pony is permitted per player, and if a player or pony leaves the field injured, the opposing team also reduces its strength by 1 player. A fresh polo pony may not be introduced into the game, as that will prove to be a distinct advantage.

The field measures about 200 meters by 56 meters (a normal polo field is about 270m by 150m), with 60 cm high stone walls running the length of the field on both sides instead of boards. Players rarely wear helmets, the horses' legs often have no bandages, and very few mallets have proper grips or straps.

In order to decide the final teams to play at the Shandur Polo Festival, preliminary matches are played both in Chitral and Gilgit;...from which the best horses and players are chosen for the final games by the local juries.  Free-style mountain polo is arguably polo in its purest form. This version of the game played at Shandur-Top has attained legendary status and is of great interest to international and domestic adventure tourists alike. There are no umpires and everything goes. The rules are: There are no rules!
In "The Roof of the World" Amin/Willets/Tetley write: "by comparison, an American Wild West rodeo might pass for choir practice."
No hit-ins! If the ball runs out over the back line, the goal-judge immediately launches another ball towards the middle of the field and the game carries on. If a player scores a goal, the goal-judge gives him a ball to hold in his right hand while also carrying the mallet. The player must then gallop down the side of the field, and at the halfway line chuck the ball in the air and strike it. Hit or miss, the game continues, but if he scores, he gets to do it again. This is known as the “tumbuk”; truly a privilege to witness if it sails through the goal! Yet there is a certain method to all the madness; it’s an extremely strategic sport! Man-marking is just as important as in any other form of polo. It’s also interesting to note how team members take turns in giving their mounts periodic breaks while the game carries on. They care very deeply for their entire pony string of ONE, which they maintain at great expense and sacrifice!
7th, 8th and 9th July – Every Year 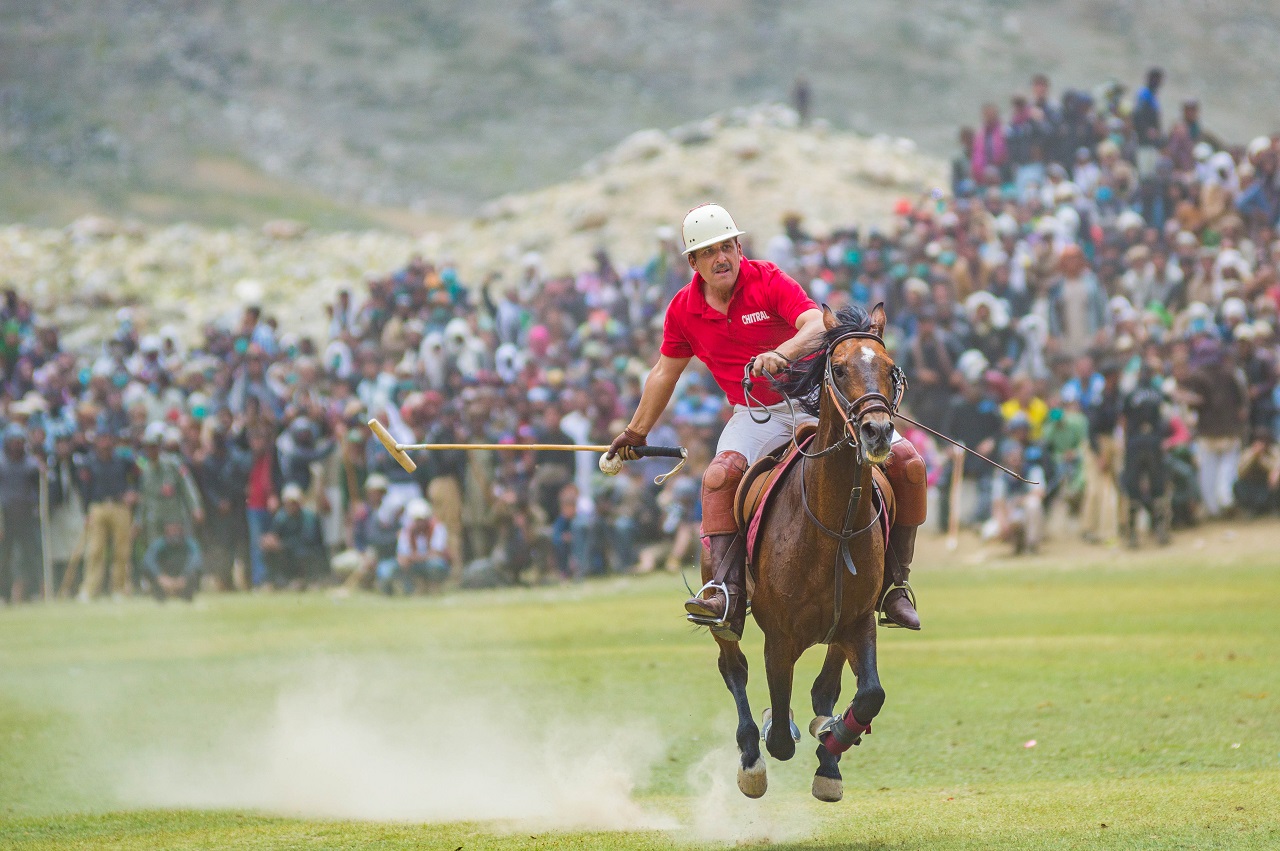 You can still contact us, right here - right now. Use this contact form to send an e-mail. Usually, we respond within 1 business day.

Hot & Cold spring/glacial water is piped to your bathrooms at both our locations including our campsite facilities in Mastuj.

Hindukush Heights offers an airport shuttle for guests. We recommend calling ahead to confirm details.

Free WiFi is available for our guests at both Chitral & Mastuj

We grow our own organic produce in Chitral including herbs, a variety of table vegetables as well as apricots, apples, peaches, pears, walnuts, cherries, blackberries, raspberries, and mulberries all grown in our family orchards. We also raise organically fed poultry and livestock which make it to our menu on a regular basis.

Fresh mineral water is sourced from a local mountain spring and provided to all hotel guests free of cost.

Meals are served buffet-style at set times for breakfast, lunch and dinner.

HKH provides a next day laundry service for its guests.

The hotel organizes jeep rentals for guests for both day trips as well as overnight stays.

Sustainable hotels are designed to respect the environment and the area where they're located. Hindukush Heights is precisely that; a family-run hotel that has progressively tried to uplift the local community and its natural surroundings by taking active measures toward social responsibility and environmental sustainability.

Built by a local workforce over a 5 year period, primarily using materials sourced in Chitral; those self-same local workers were then given the opportunity to be retrained as service staff at the hotel. The emotional bond of these local Chitralis with Hindukush Heights has been the foundation upon which our success is based

Situated away from any noise or air pollution; the hotel is constantly evolving to maintain a minimal impact on its local environment. The water supply to the hotel is directly sourced from a natural spring from the surrounding mountains and certified by the World Health Organization for its purity and mineral quality. Hindukush Heights also has its very own Run of river Hydro-Electric plant, powered by the Chitral River providing zero-emission hydro-electricity to the hotel and its supporting structures.

The fruits and vegetables used in our diverse dining menu are organically grown in the hotel’s own garden. We also do our utmost to limit the use of plastics and chemicals on our premises and supply our guests with organic soaps made with 100% natural ingredients. This environmental awareness allows us to welcome all our guests into an atmosphere of comfort, care, and safety; perfectly blended with the love of hospitality that the people of Chitral take great pride in.

Hindukush Heights has its own dedicated Run of River Hydro-Electric plant, powered by the Chitral River which provides zero-emission hydro-electricity to the hotel and its supporting structures. The hotel also benefits from a supplementary solar power system for hot water and other low usage requirements.

The water supply to the hotel is directly sourced from a natural spring and certified by the World Health Organization for its purity and mineral quality. From this source, hot & cold spring water is piped directly to your bathrooms. Mastuj Fort has its own glacial water source which is also available at our campsite facilities situated over there. We do our utmost to limit the use of plastics and chemicals on our premises and supply our guests with organic soaps made with 100% natural ingredients.

The fruits and vegetables used in our diverse dining menu sourced from the hotel’s own organic garden. Our garden produce includes herbs and a variety of table vegetables. In addition we have a large variety of fruit (apricots, apples, peaches, pears, walnuts, cherries, blackberries, raspberries, and mulberries) from our family orchards. We also raise organically fed poultry and livestock which make it to our menu on a regular basis.